Third Reich or Nazi Germany is the name given to the time period when Germany was under control of Adolf Hitler and his party, National Socialist German Workers’ Party. It was commonly known as the Nazi Party. The empire started in 1933 when Adolf Hitler was appointed Chancellor of Germany. It fell nearly 13 years later at the end of World War 2 in the European front.

Hitler was appointed Chancellor on the 30th of January, 1933. After this, The Nazi Party started eliminating any political opposition. On 19th August 1934, the office of chancellery and presidency were merged, and Adolf Hitler took over as dictator of Germany. He was referred to as the Fuhrer (leader). After having complete power, Hitler and his party started to improve the economic status of Germany by funding military greatly and mixed economy. Unemployment was eliminated because of public work that was under taken. One such thing was the construction of the Autobahns (highways). After military power and economic stability had been gained, the Third Reich started acting like many empires. Austria and part of Czechoslovakia were annexed in 1938 and 1939 using the threat of war. Hitler soon made a pact with Joseph Stalin, leader of the Soviet Union at that time. The pact was a non-aggression pact, and it lead to Germany’s invasion of Poland in September 1939. This event started World War 2 in Europe. Soon, all of Poland had been either annexed, or occupied by both Germany and USSR. By 1940, Germany was allied with Italy and other Axis powers and had conquered most of Europe. There were many countries annexed or occupied by Germany, they were:

This map shows the present day borders of the area once controlled by the Third Reich: 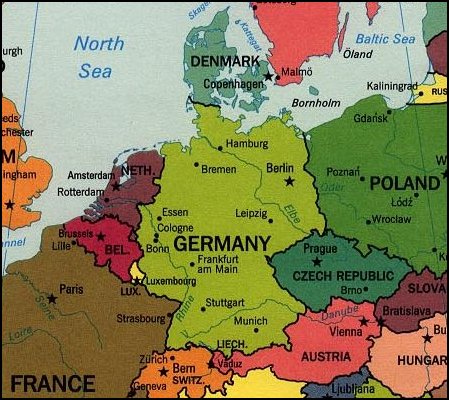 The map below shows the geographical setting of the areas which were under the control of the Third Reich:

Operation Barbarossa was the codename given to the invasion of Soviet Russia by Germany. It commenced on the 22nd of June, 1941, and is what brought the downfall of the Third Reich. Hitler had underestimated the weather in the location, and when winter came, the German troops suffered great casualties due to the cold. 95% of the German Army casualties were taken during Operation Barbarossa from 1941 to 1944. Because of Operation Barbarossa, the non-aggression pact between USSR and Germany had been broken. This caused the USSR to join the allied forces and launch an attack against Germany.

In 1945, the Third Reich was seeing the last of its days. on the 12th of January, the Red Army breached the German Front, and led the army west. Soon the Red Army was upon Berlin, and attacked from the east and south. The battle of Berlin began on the 20th of April and continued till the 2nd of May. On the 27th of April Benito Mussolini, dictator of Italy and allied with Germany, was executed as allied forces closed in on Milan. By the 30th of April, the Third Reich was shattered, and the troops were spread out across the several fronts. Hitler realized to giving guns to teenage boys and having them fight. On the same day, he realized that it was the end for the Third Reich, and he commit suicide in his bunker. The battle of Berlin lasted for two more days, until the Third Reich finally surrendered, and the empire fell. However, some troops continued to fight in the north-western, western, and south-western fronts. They continued to fight until 8th of may to surrender to the western allied forces rather than the Soviet Union.

As Dave Johnson mentions in his website, “The domination of one nation over another through force, threat of force, or economic influence to the benefit of the aggressor nation,” is known as imperialism. The Third Reich is considered an empire because it followed the ‘requirements’ to be an empire. The Third Reich dominated several nations through force, such as Poland, through threat of force, like Sudetenland, and economic influence, like Austria. All the nations were dominated for the benefit of the Third Reich. Due to all these reasons, the Third Reich is considered an empire.

The Third Reich has greatly impacted our world today, and the impacts started during the time of the Third Reich. The leader of the Third Reich, Hitler, thought Jewish people are the ones bringing down his country and people like him. He believed that it was the fault of the Jewish people that his country had lost in the first World War. This caused the Holocaust to start. This was when Jewish people were discriminated and murdered in concentration camps. The genocide started when Hitler was first appointed chancellor of Germany. Because of the Holocaust, racism with jewish people, and mention of Hitler is still a sensitive matter, and there are laws around the world of even talking about such things.

Another impact the Third Reich has had on the world is the invention of the atom bomb. Albert Einstein, a German theoretical physicist, was one of the first to know how to utilise the power of the atom as an atom bomb. He lived in Germany and wrote to the president of the USA about it. He then went for a visit in USA and learning about the rise of Hitler and his Nazi Party, he decided to stay in USA and became an American citizen in 1940.

The impacts above caused by the Third Reich were negative. But there was also a positive impact made on the world by the Third Reich. This was the invention of the jet engine. The first jet engine to ever be used in an aircraft was by the German Army in 1939. Although it was a great invention, and the fighter jet could take down enemy aircrafts in the ratio 2:1, Hitler decided it was a failed experiment and decided not to use them in the rest of the battles.

There were many important people involved with the Third Reich, and they were not necessarily from the empire. The most important person was Adolf Hitler. Adolf Hitler was an Austrian who was a German politician. He was a soldier in the first Word War, and that is where his hatred for Jewish people began. A group of soldiers in the first Word War were in charge of supplying troops with ammunition, Hitler believed that that group was solely made of Jewish people, and blamed them of Germany’s loss in the war. After sometime, Hitler was appointed chancellor of Germany by the president in 1933. He soon took over as dictator of Germany and lead it as an empire for until the end. He was also the leader of the Third Reich. Another very important person was Joseph Stalin. He was the dictator of USSR and is the person who eventually brought the downfall of the Third Reich. Hitler and Joseph Stalin had agreed upon a non-aggression pact during World War 2. Hitler broke this pact, and the USSR joined the Allied Forces to take the Third Reich down. With the overwhelming power of the Red Army, Germany was invaded by both western Allied Forces and the Red Army.

Here is a boring little presentation that is only interesting when being presented by me: